Who else is getting excited about the biggest party at the Lake of the Ozarks? We've still got a few weeks to go before the 2018 Lake of the Ozarks Mardi Gras Pub Crawl is officially here, (Saturday, February 17) so we're passing the time by looking up interesting tidbits about the holiday. Bet you don't know most of the fun facts below. (So keep reading and find out!) Always a Different Date
The date that Mardi Gras is celebrated depends on Easter, and the date for that holiday depends on the moon. Easter happens on the 1st Sunday after the 1st full moon that occurs after the 1st day of spring. Mardi Gras is placed on the Tuesday before Ash Wednesday, which is the beginning of Lent leading up to Easter.

The Pope Gets the Credit
Pope Gregory XIII is the person responsible for putting Mardi Gras on the Gregorian calendar all the way back in 1582 on the day before Ash Wednesday. The holiday didn't come to North America until the 17th century. The Le Moyne brothers shared the celebration with locals when they came to defend France's claim on Louisiana.

A Variety of Names
Mardi Gras is "Fat Tuesday" since it is the last day to revel and enjoy excess before making sacrifices for Lent. It can also be referred to as "Shrove Tuesday," because "shrove" comes from "shrive" which means "to confess," and going to confession is the way some people begin their season of Lent. It is also known as "Pancake Day" in some places (like Ireland, Australia, and Canada) where they spend the holiday eating pancakes and doing pancake-related activities instead of drinking and throwing beads. 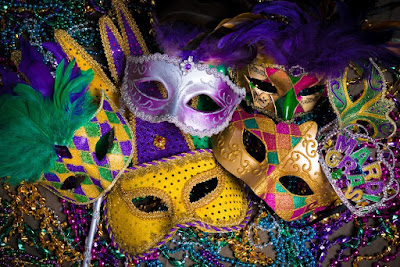 Masks are Required by Law
That is, if you are riding on a float. It is illegal to be on a Mardi Gras float unless you are wearing a mask. If you are simply watching the parade, you aren't required to put one on, but it can make things a lot more fun!

Super Gras 2013
In 2013, the Super Bowl took place in New Orleans during Mardi Gras. Hoping to better contain the additional crowds, the city expanded the 12-day parade season so that none would be taking place on game day.

Wasn't Always in New Orleans
Even though New Orleans is the place most associated with Mardi Gras in the United States (and we're working hard to make the Lake of the Ozarks Mardi Gras Pub Crawl the next biggest party!) that's not where it was first celebrated. In 1699, the Le Moyne brothers we mentioned earlier held their party about 60 miles downriver from the future site of the city of New Orleans. They don't get to claim the first Mardi Gras parade either! That took place in Mobile, Alabama in 1703, 15 years before New Orleans even existed. 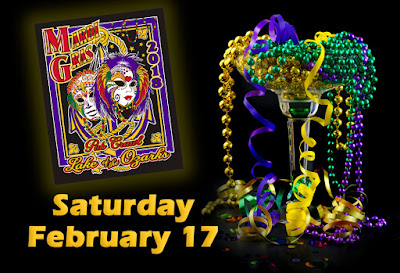 Okay, now you know some pretty cool stuff about the holiday. Here's the information you need to know so that you can attend the most exciting pub crawl in mid-Missouri.

PRICE:
$10 for a wristband to get you onto all Pub Crawl shuttle buses and into every participating venue for fun and live music.

You can find more information, including a list of places to stay while you are in town offering pub crawl weekend discounts, on our website at www.LakePubCrawl.com. Another way to stay in-the-know is to text "LakePubCrawl" to 71441 for updates and info. Start your planning now and don't miss a minute of the fun this year!

To keep up with the latest news:

If you need additional information, contact us at info@lakepubcrawl.com
Posted by Lake Pub Crawl at 2:05 PM