Mardi Gras Celebrations Around The World

The Mardi Gras celebrations in New Orleans are probably the most famous in the United States (although the Lake of the Ozarks Mardi Gras Pub Crawl is doing our best to gain on their popularity!) This fantastic holiday is also celebrated all around the world. Here is a look at some of the different things you could expect to see if you travel outside of the country during Mardi Gras.

Rio de Janiero, Brazil
This celebration is labeled as the world's biggest Carnival. According to the calendar, their events last for 5 days, but the parties can begin months before that! It takes place in the peak of summer in South America with wildly elaborate balls, uninhibited dancing, flashy costumes, and huge, glittery parades. Dozens of samba schools compete in a famous competition consisting of costumes, choreography, and percussion.

Venice, Italy
The Carnevale di Venezia has old roots with the first one taking place in the year 1162. Fancy costumes are worn, huge balls are thrown, and they are extremely well-known for the elaborate masks that are worn. There are also many carnivals, street plays, fireworks, concerts, and dances all over. A water procession with rowers wearing masks in decorated boats takes place on the Grand Canal. The "official" end to the celebration happens on Shrove Tuesday.

Cadiz, Spain
This town imported many of its traditions surrounding this holiday from Venice. Carnival was abolished at many different times during the history of Spain, but it has always thrived in Cadiz. The locals roast prohibitions and politicians, and huge groups of people roam the streets singing songs mocking current events and prominent figures. They are renowned for the papier mache figurines and satirical songs common at the events. 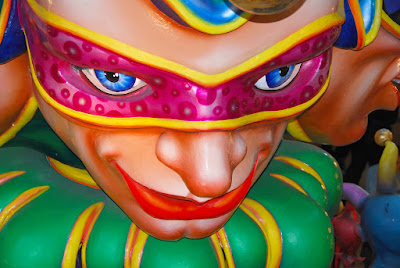 Binche, Belgium
All of Belgium observes Fat Tuesday, but the most famous of these celebrations take place in Binche. Rather than throwing beads to parade spectators, masked performers throw oranges into the crowds as a symbol of spring. Red costumes and wooden clogs are worn and people dance with brooms to chase away evil spirits. A pre-festival tradition is a breakfast of oysters and champagne.

Nice, France
This 15-day festival is built around blossoms. There are flower battles and parades with floats made only of flowers. People in the parade wear costumes and have been known to throw flowers like mimosas, gerberas, and lilies to the parade watchers.

Oruro, Bolivia
This is an obscure carnival celebration that has survived since pre-colonial days. It was originally based on a ceremony of giving thanks to Pachamama (Mother Earth) but eventually integrated with traditional Catholic carnival traditions. It takes place throughout the 8 days preceding Ash Wednesday. There is a procession with 2 figures dressed as a condor and a bear along with masked dancers in red cloaks with horns, bulging eyes, and fangs portraying devils following figures of Satan and Lucifer. This parade leads to a football stadium where 2 medieval plays are enacted. The first is about the brutal Spanish conquistadores and the second portrays the archangel Michael defeating the devils and the 7 deadly sins. 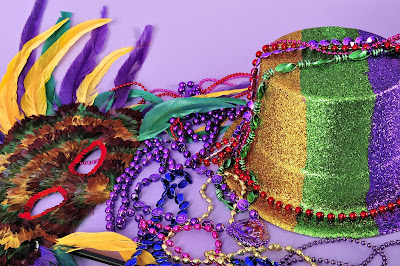 Cologne, Germany
Some celebrations last days, others a few weeks, but here they begin on November 11 and keep the parties going all the way to Fat Tuesday! It is referred to as "crazy days." Some highlights include the burning of a straw figure, a rose parade, and lots of drinking. As a matter of fact, during this time the closing times for pubs and bars are suspended.

Quebec, Canada
The official mascot for this carnival is Bonhomme who happens to be a giant snowman. There are lots of sporty competitions including dog sled races. Lots of ice and snow sculptures are made everywhere. It doesn't contain the flashy costumes of most Mardi Gras celebrations, but there is a snow bath where people can celebrate indoors in their swimsuits. 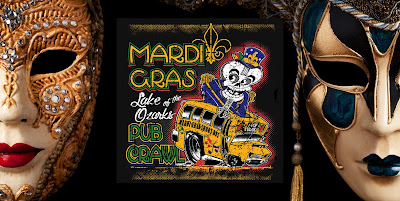 Mardi Gras in the U.S.A.
Mardi Gras is celebrated all across the United States. A lot of the parties are similar in nature, but a few have their own special characteristics that make them stand apart from the rest. Next week's blog will take a closer look at some of the most interesting celebrations, including the world's largest pub crawl that takes place in mid-Missouri at the Lake of the Ozarks!

The 2019 Lake Pub Crawl is happening on Saturday, February 16. A $10 wristband gets you into every participating venue, each featuring their own live music. You also get a safe, sober ride on all of the pub crawl buses from 4:00 pm in the afternoon until 2:30 am the next morning. 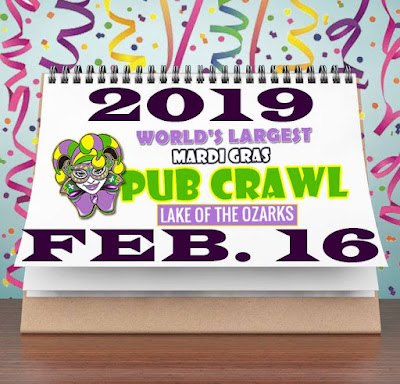 We'll get into more detail about that next week. In the meantime, sign up for our newsletter at www.LakePubCrawl.com and text "LAKEPUBCRAWL" to 71441 to receive information sent directly to your phone. It's the biggest party at the Lake of the Ozarks and you definitely do not want to miss it!

Brought to you by the
Lake Area Chamber of Commerce
Posted by Lake Pub Crawl at 2:23 PM